The Devils in the detail - a response from Croydon CCG...

Following the recent publicity regarding Croydon Clinical Commissioning Group's Consultation (which was featured in a previous post) the CCCG were approached and asked for more clarity. They responded with the following statement, by Dr Tony Brzezicki, Clinical Chair of NHS Croydon Trust:

Please note: The inclusion of a specific term - 'cow's milk allergy'. The specific line that interests me is...

'in particular, the high cost for products for parents and carers of babies with a cow's milk allergy who may need Neocate or Nutramigen.'

This is important as various of their documents relating to the proposed prescription changes seemed to use 'lactose free' and or cmpa, without really being clear what these terms mean and until now have not identified any formulas in particular. Let's unpick this line a bit:

If you are Lactose Intolerant that means you can't tolerate the sugars in milk.

Lactose free formulas are readily available in supermarkets and are similarly priced to normal milk formulas. That seems reasonable enough. I think few people would quibble with the proposal put out by CCCG that people probably should pay for these themselves, without getting them on prescription.

'CMPA,' or 'cow's milk protein allergy,' to give it its full name, is completely different. CMPA is an allergy to the proteins in milk, which is recognised by NICE, as a medical condition, and about which NICE have provided Healthcare Professionals a great deal of detailed information (see here).

NICE make it clear that infants with this condition should strictly avoid all forms of milk protein, except in extensively hydrolysed formulas - such as Nutramigen, Similac Alimentum and Althea. However, some babies cannot tolerate even these hydrolysed formulas, so for these babies, NICE recommend an Amino Acid Formula or AAF, such as Neocate - as mentioned by name in the above statement. These are the ones about which many allergy mums are worried that the CCCG mean, when they say that parents should pay for their own.

Currently 'Nutramigen' and 'Neocate, ' the two formulas mentioned in Para 5.1. of the CCCG's statement), are often prescribed for children with CMPA. As accepted in the statement above, they are very expensive.

Allergy mums are not freeloaders. Many mums have expressed a willingness to contribute towards the cost, but with at a price tag of £45 or so (for a tin that is much smaller than normal formulas), it is prohibitive for most, to bear the full financial load.


A way through for CMPA??

There is, however, a line in their Consultation report which refers to GPs being able to prescribe unspecified 'specialised formulas', once a recommendation has come through from a Specialist, see here:

but only for those who meet certain 'medical conditions'.

Interestingly enough, if you read the Report regarding the consultation, in full, there seem to be hints that GP's are suspected of having over-prescribed EHF's and AAF's in the past, which is why they are keen for specialists to identify the specific conditions that require the formula.

CMPA is not listed as one of those conditions, although 'faltering growth' which often accompanies untreated CMPA, is. However, 'faltering growth' does not always become immediately apparent in CMPA, which can manifest itself in various ways anyway. So here lies a problem.

I really worry that desperate parents will end up looking for alternatives in all the wrong places - funnily enough, something that has actually already been identified in the CCCG's report!


Moreover, originally, in their proposals, the CCCG appeared to suggest, that mums affected by their proposed cuts could use Healthy Start vouchers towards the cost of the milks they would need to purchase, but it now appears in their report (but not in the statement above) that this is not the case and there would be a shortfall, which they had not foreseen. This suggests that those in the local area who responded to the consultation did not have full access to the facts - perhaps because those putting together the proposals and the report for the CCCG did not fully understand the implications themselves.


Since this statement was released, it seems that Croydon CCG have gone remarkably quiet, despite the desperate attempts of many to obtain clarification of what all this means. It may be that Croydon CCG are only now beginning to get to grips with the implications themselves.

As these proposals have yet to be framed into an 'implementation plan', it is hoped that there will be some room for re-working, and, as I understand it, from various Healthcare Professionals I have approached, various professional bodies intend to attempt to liaise with CCG with this in mind.

As there have been no further statements from the CCCG since the one shown above, I sincerely hope they are now currently working on a way to resolve the situation, before commenting further.

We shall just have to wait and see.


If you live in the Croydon area...

... and wish to respond to the CCCG's Statement, as well as those points listed above, you may like to consider the following points:

1 1. That, if, until recently, you were unaware that the consultation was taking place (in fact around 346 people responded to their consultation – out of an area the size of Croydon -pop. around 398,000) in your opinion, this would suggest that either it escaped peoples' notice due to a lack of publicity, or that people failed to realise the impact of some of the decisions potentially being made. Let's make that clear - this consultation elicited responses from less than 0.1% of the area (less than 1 in 1,000), therefore hardly representative of the local population!

2. The original consultation statements were unclear - there was some confusion as to the terms used, which conditions were exempt and which milks were being considered for withdrawal. Also, there was a distinct lack of supporting evidence to back their claims about the easy availability of alternative milks in supermarkets (although the report did go to the trouble of providing data re. other proposed cuts e.g. gluten free food on prescription and vitamin D prescription).
Rather the consultation engagement document and public meeting slides confidently asserted that alternative cows milk and lactose free infant formulas were widely available at similar cost. However, according to the CCCG's own statement, it is now evident that higher cost specialised formula with no readily available alternative are within scope of the proposals, and were not presented as such. This is particularly evident if you read their 'easy-reading' copy of the proposal documents (see here P.6). This may well have materially affected the consultation outcome for this question as it was posed as, to the uninitiated, it would look perfectly reasonable, to agree to the proposals. The 49% agreement level could have been significantly lower given this.

3.  Although allowance has been made within CCCG's consultation report (see here, P. 99 of 332), for GPs' to prescribe these formulas, once they have been recommended by a Specialist, in many instances, people have to wait a long time to get such an appointment. This could lead to lots of babies being put 'on hold' before they can get hold of the treatment they need – namely an appropriate specialised formula - which could make them very poorly. In desperation, some people may well attempt to seek alternatives from unsafe sources. Therefore, the impact on people’s health and well-being as a result of their proposals being implemented could well out-weigh the proposed savings.

If you do send an email, please stick to the facts, and tell them it’s a formal complaint.

If you do not live in the Croydon area:

A campaign group has been set up to help families affected by potential changes. Called The Campaign for Milk Prescription Access, they hope to help counter the proposed changes and help all who are being expected to pay for their own milk. The campaign group are active on Twitter and Face Book and also have a website, see here. 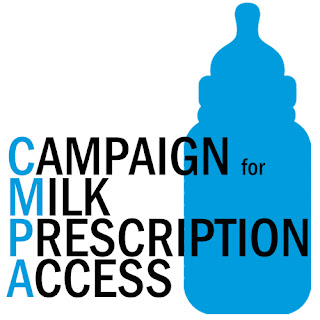 Posted by Hullaballou at 3:08 am 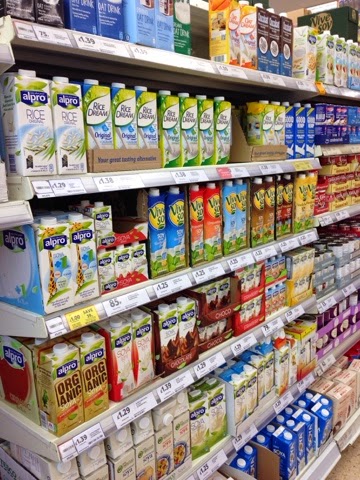